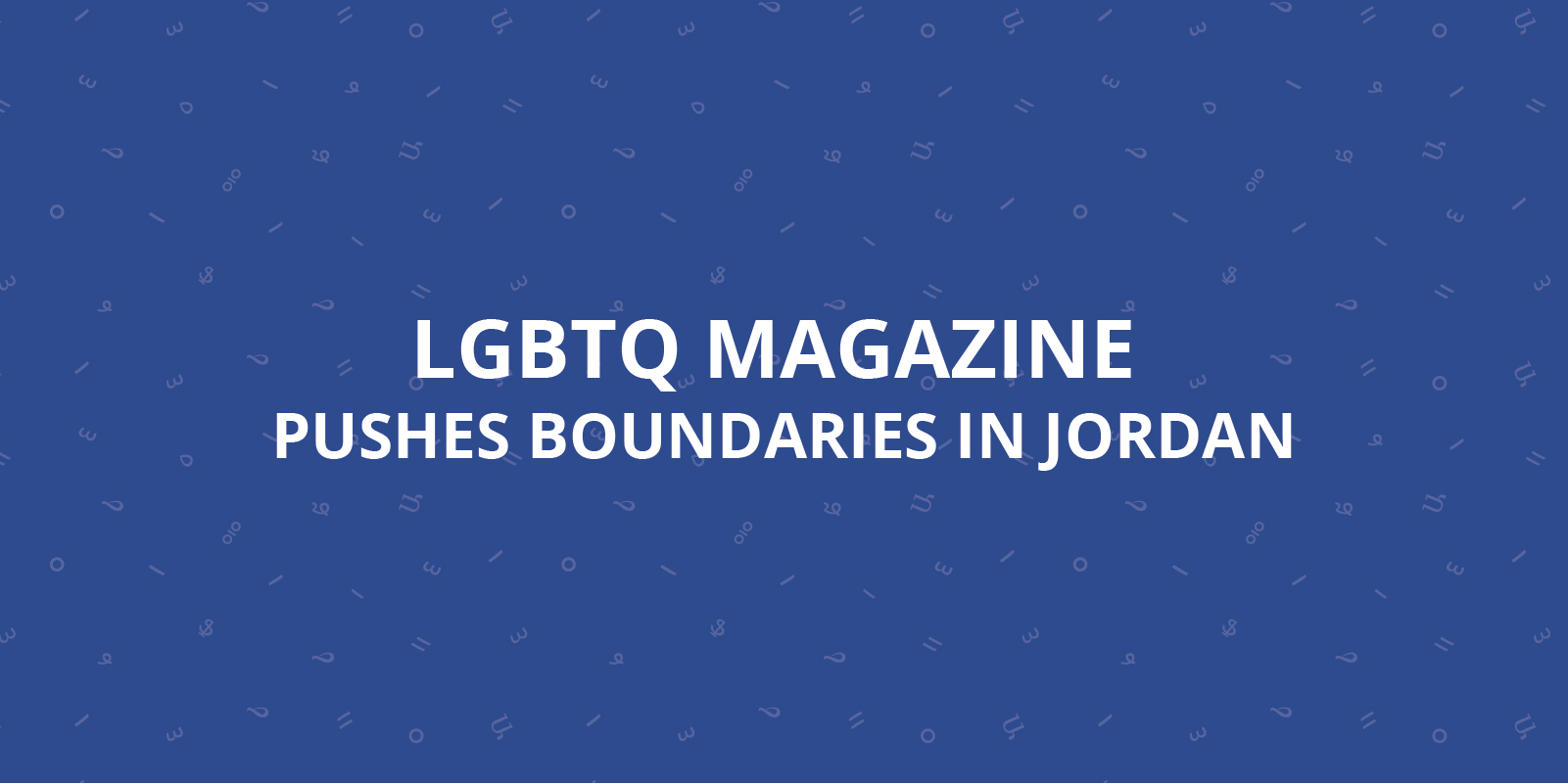 For eight years now, his magazine has been hammering in the Jordanian press a positive image of homosexuals and the LGBTQ community. Since 2007, Khalid Abdel-Hadi edits a grassroots local online magazine called My.Kali. But something about his push to change his society’s homophobic attitudes sounded like preaching to the converted.

It’s true that the magazine caused a stir, as it was the first publication in the country (and one of the first in the MENA region) to openly address health and social issues related to the LGBTQ community. But because it was only in English, it remained confined to a small, westernized section of society and was tolerated.

Recently, Abdel-Hadi was emboldened to take a risky step forward and start publishing an Arabic version of his magazine in order to reach a wider audience of Jordanian and Arab readers.

“We want to show that the LGBTQ community and their civil rights are also part of our culture,” he said. For many Jordanians and Arabs in general, homosexuality is an alien concept imported from the west.

This notion was significantly brought to the surface following the celebration of the International Day against Homophobia in May last year. For the LGBTQ community in Jordan, it was one of the first occasions to meet at a local art space and openly discuss the appropriation of negative lingo insulting to queers, ways to bolster social support for sexual minorities and the experiences of transgender people.

Even though they’d expected to be criticized in this conservative country, they had not foreseen their meeting would have such big repercussions. More than the event itself, what caught the attention of the local media was the presence of the US ambassador to Jordan.

The following day, a big newspaper wrote a hostile and misleading article titled, “The US embassy supports perversion”, suggesting that the embassy was financing the spread of perversion in Jordanian society. The article was then recycled, in one form or another, by dozens of websites in just 48 hours.

Organizers tried to minimize the significance of the presence of the ambassador, who had attended the event in her personal capacity without prior notice and had not given a penny to support it. But the news was quickly used to the disadvantage of the community even leading to a heated debate in Parliament.

What this incident showed was the struggle by LGBTQ activists in Jordan and other Arab nations to present gay rights to reticent societies as a grassroots, local fight and not part of a political agenda imposed by the West.

“It is the usual conspiratorial propaganda used to discredit any genuine social struggle,” said Abdel-Hadi. Sensationalist articles mentioning homosexuality as a negativism go viral in Jordan.

The online world and social media, as one could gather, opened many possibilities for LGBTQ communities and brought the issue of homosexuality to the surface. For Abdel-Hadi, it is important to counter the insults against LGBTQ individuals that appear online by a positive message that could bring a slow change in attitudes. My.Kali focuses on bringing forward examples of support to the LGBTQ community by celebrities and respected members of society.

Abdel-Hadi created the magazine with a group of friends at the age of 18. “I was young and bold and I liked to be photographed so I put myself on the cover shirtless”, he said. At first, he put the magazine on a CD that was distributed at a private party. A newspaper close to Islamists got hold of the magazine’s content and wrote that homosexuals were starting a revolution in the country. They used Abdel-Hadi’s photo outing him as a result. After that, every time local publications wanted to talk about homosexuality, they would use his photo as an illustration.

Today, Abdel-Hadi openly speaks out about LGBTQ rights in his country. His bi-monthly magazine gets contributions from 30 volunteer writers, photographers and graphic designers. It is an entirely personal initiative that receives no outside funding.

Surprisingly, Jordan is one of few Arab nations that don’t have laws forbidding homosexuality. This gives Abdel-Hadi and other activists a certain margin of freedom.

But society remains largely homophobic and there are still no gay rights groups in the country. Pleas to establish a gay organization were turned down officially by the government in 2009. Also, transgender individuals and gays who don’t fit the local macho norms are routinely harassed by authorities. Several gay-friendly venues and hangouts were closed down for bogus reasons of “disturbing the peace.” Recently, government officials stated that Jordan was a Muslim country that rejects homosexuality because it is against the nation’s Islamic values.

“We have to be very careful because there is a strong social stigma associated with homosexuality. We don’t want to antagonize the masses,” said Abdel-Hadi. Even if laws don’t criminalize homosexuality, they don’t protect LGBTQ individuals from discrimination and abuse either.

According to Abdel-Hadi, the cyber space and dating apps remain a safe way for LGBTQ individuals to interact and meet. There is always fear of blackmail and forced outing, he said. But he added that such cases are not very common.

My.Kali’s next fight is to promote the rights of transgender individuals. The magazine is featuring in its next issue the struggles of several transgender persons.