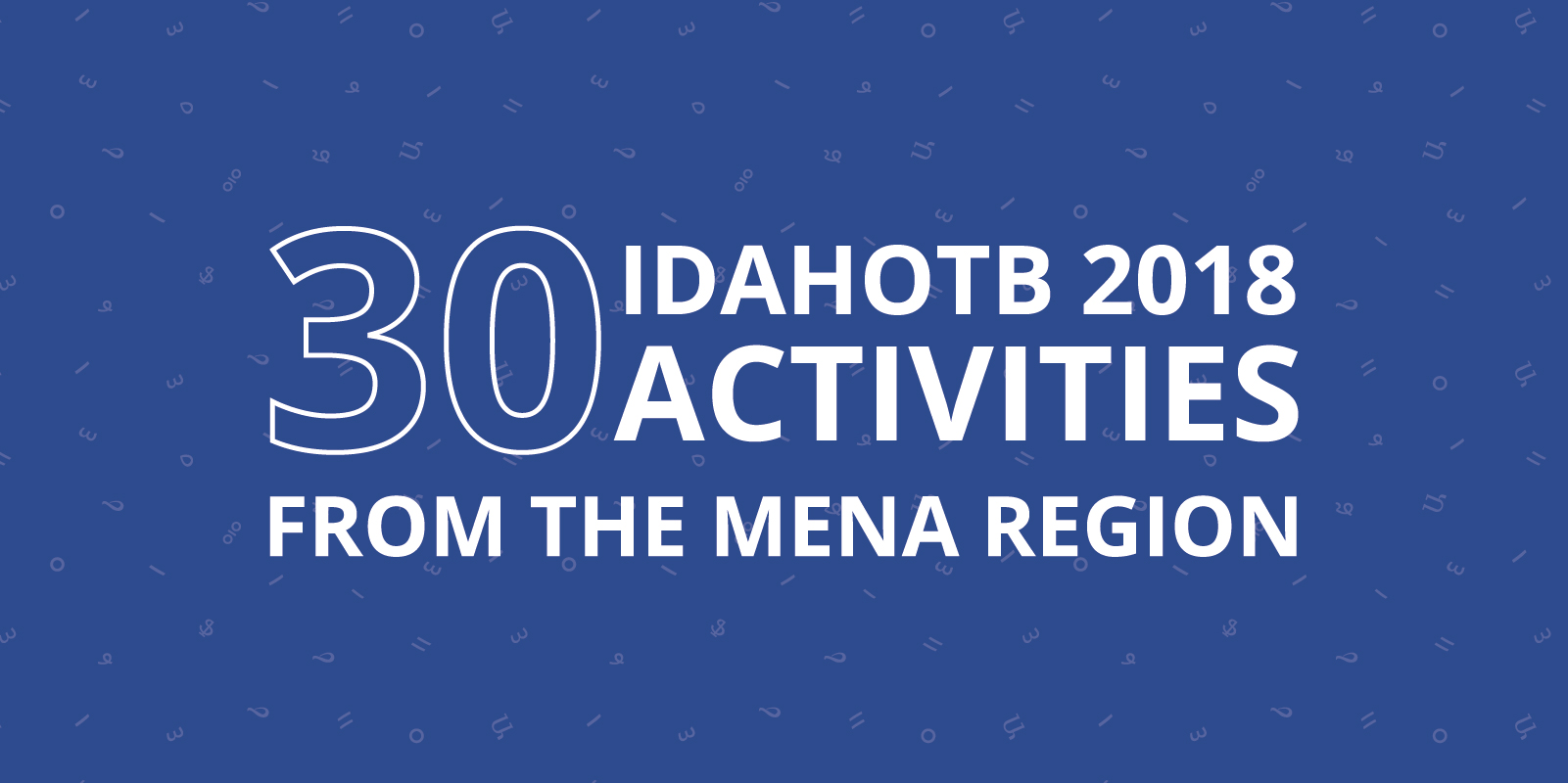 General PublicationsGeneral Reports
By admin May 20, 2018 April 3rd, 2019 No Comments

International Day Against Homophobia, Transphobia and Biophobia was created in 2004 to draw the attention of policymakers, opinion leaders, social movements, the public, and the media to the violence and discrimination experienced by LGBTI people internationally.

17 May is now celebrated in more than 130 countries, including the MENA region. Last year, we published a list like this one, with 14 IDAHOTB activities from the MENA region. This year, we are counting 30 of them!

MOSAIC started their IDAHOT campaign with a movie night under the title “What is pride?” and screened the Egyptian movie El Anesa Hanafy “الآنسة حنفي‎”

Helem launched their IDAHOT 2018 campaign with a video encouraging members of the community to speak-up for their rights.

Helem shared a series of posters realized by their volunteers to denounce stigma and discrimination on LGBTIQ people in a funny way. More posters here.

Legal Agenda shared a typical argument to drop article 534 from the penal code and advertised for it with a video.

Beirut Pride started smoothly with a brunch celebrating families and parents who support their kids love and relationship no matter what.

Opening night of Beirut Pride 2018 was celebrated by a love concert performed but Alsarah & The Nubatones and Khansa at Station Beirut.

MOSAIC organized a talk in collaboration with AUB Gender and Sexuality Club on “Social, Medical, and Legal challenges facing individuals from Gender Minorities”

Beirut Pride organized a brunch accompanied with music entertainment that featured a talk about Trans* in Lebanon, followed by a discussion about femininity and masculinity in the Migrant Community Center.

Helem conducted a social experiment that is purely voluntary, to see the extent to which the street is acceptable to the LGBTIQ community.

Helem’s Women’s Committee organized for the first time a Drag King Show. There were a lineup of Drag Kings performing throughout the night, followed by an open floor for everyone who wanted to join.

An enormous dance show took place in a club in which many runway categories were performed:

– ClubKids (Slay the runway with your over the top drag. Beyond female/male impersonation, Party Monsters, a piece of moving art).
– Pride Extravaganza (From Rainbows to Unicorns, turn out a look that represents pride in the most extravagant way).
– Oriental Realness (Traditional Arabian Costumes with a twist).
-Voguing (Old-way vogue, New-Way vogue or Voguing Femme).
-Freestyle (The dance floor is yours, mix any dance style, sing live or do stand up comedy, just slay us).
-LipSync For Your Life (Drag or not, turn up the ball with your best lipsync performance).

MOSAIC organized a drag talk under the name of “مش رح تتفرجوا، رح تتعرفوا” to raise awareness about drag culture. The talk highlighted the history and current challenges of the international drag scene and the local drag culture.

Beirut Pride announced during a happy hour event the Corporate Pledge, a Beirut Pride initiative that aims at addressing discrimination in the workspace. It will be steered by LGBT professionals in synchronization with local business groups and collectives, when it starts in September 2018.

Helem gave a conference titled “The LGBTQI+ community: In between the violations and the recommendations”. The conference hosted interventions by several NGOs and started with reading a statement denouncing the suspension of IDAHOT pride and intimidations on LGBTIQ activists.

Tayf Beirut community center had a storytelling night with their members and a candlelit vigil for victims of violences based on SOGI.

Tunisian coalition for LGBTIQ rights presented in an event a report of the investigation into violence against LGBT people. You can read the report here.

IDAHOT coincided with the first night of Ramadan. Tunisian LGBT associations celebrated this day at a Ramadanesque night with a dance show.

The Alliance of Queer Egyptian Organizations launched IDAHOT 2018 campaign with the hashtag #RainbowNodes and scored some online visibility by sharing posters on different topics including solidarity and alliances. Check out the poster here.

Egyptian organizations produced a video to denounce repeated crackdowns on the LGBT community in Egypt and send a clear message of support and solidarity.

Posted by The Alliance of Queer Egyptian Organizations on Thursday, May 17, 2018

23) Sudan: Masahat Foundation for Sexual and Gender Diversity (Egypt and Sudan) and Shades of Ebony Group

A celebration was held in the Sudanese capital Khartoum where about 50 people, mostly from the LGBTQI community and allies, were present. The program included the introduction of Mesahat foundation and Shades of Ebony group and the activities of the two groups. Also screening the videos from #NoLongerAlone campaign and a special message from Ahmed Omar, a Sudanese queer who came out in 2015, The program also included a photography exhibition titled “Ownership Certificate” and the launching of the IDAHOTB Regional Campaign in collaboration with LGBTQI+ organizations and groups from the Middle East and North Africa under the theme #We _are_one

Akalyat celebrated IDAHOT with posters and an online call for solidarity.

M.A.L.I produced a video and a poster to denounce the homophobia of the state and called for the abolition of article 489 from the penal code.

Rasan produced a shot movie on coexistence despite any difference based on gander, religion, ethnicity..

Posted by Rasan Organization on Thursday, May 17, 2018

Rasan shared posters on the occasion of IDAHOT and called for coexistence and peace. More from Rasan.

AFE produced a website to aggregate all IDAHOT 2018 events in the MENA region.

1. Lost their lives to gender-based violence
2. Suffer from structural and organizational oppression
3. Fled their homes from discrimination
4. Faced bullying in public spaces
5. Got detained for choosing love
6. Stood up for their basic rights

The Free Feminist Union launched the hashtag #Discrimination_is_the_crime with a Facebook frame.

Oops! We missed your country or your activity ? Please send us what you did for IDAHOT18 on aida@www.afemena.com 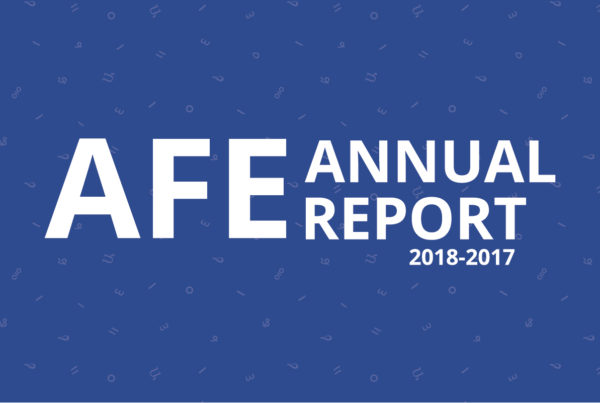 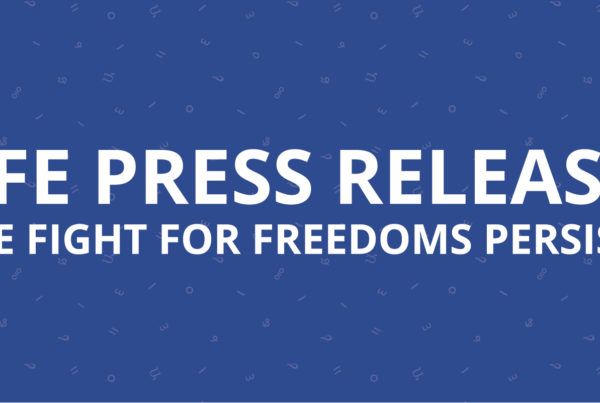