The Price of confinement

The impact of COVID-19 on LGBTQI+ refugees’ community in Lebanon

Since early March 2020, several Lebanese municipalities implemented curfews that restrict the movement of Syrian refugees to specific times, citing COVID-19 concerns. These measures were enforced before the Lebanese government called for a nationwide curfew. In an article published in April 2nd, Human Rights Watch stated that the restrictions on Syrian refugees exceeded those that the government has imposed on the general population. The report stated that “There is no evidence that extra curfews for Syrian refugees will help limit the spread of COVID-19. The coronavirus does not discriminate, and limiting the spread and impact of COVID-19 in Lebanon requires ensuring that everyone is able to access testing and treatment centers.”

As of April 22, there are 682 confirmed cases of COVID-19 in Lebanon, as confirmed by the Lebanese Ministry of Public Health on their website, with no confirmed cases among refugees so far. The government announced that it would immediately suspend travel from and to countries with serious COVID-19 outbreaks, and included Syria in those countries. The Lebanese government enforced closure to all air, land, and sea borders on March 18th and instructed security forces to step up measures to ensure that residents remain at home. The government increased these measures on March 26th and announced a curfew between the hours of 7 p.m. and 5 a.m with limited exceptions.

All these measures and restrictions have created a state of fear and confusion for most of the Syrian refugees in Lebanon. The lack of trust and communication between the refugees and the Lebanese government has raised many questions regarding whether these refugees will receive the proper awareness, medical support, and treatment in case of any confirmed cases of COVID-19 among them. Human Rights Watch said that the Lebanese government should clearly communicate to Syrian refugees that they can get medical support, without penalty, in case of experiencing COVID-19 symptoms, even if they lack residence or other documentation. On the other hand, Human Rights Watch further concluded within the aforementioned article that human rights law requires the Lebanese authorities to address the health needs of the refugees in the context of COVID-19 pandemic.

Many refugees are affected by the COVID-19 pandemic. Most refugees residing in Lebanon have minimum wage jobs as a means of support, while some of them are in the process of resettlement to their final destination. Unfortunately, the UNHCR along with IOM have suspended all the refugee’s resettlement departures that were already planned as part of the global travel restrictions to help limit the spread of the COVID-19 virus. Thus, all travels have been delayed until further notice. All in-person appointments with the UNHCR have also been delayed until further notice.

Some interviews were conducted over the phone with some refugees who live in different areas in Lebanon. These interviews are aimed to evaluate the situation of those refugees and the impact of the COVID-19 pandemic on their day-to-day lives. I have also conducted some interviews with employees and social workers from different NGOs in order to evaluate the impact of COVID-19 on the suspension of many refugees’ services aimed to support and help LGBTQI+ refugees. 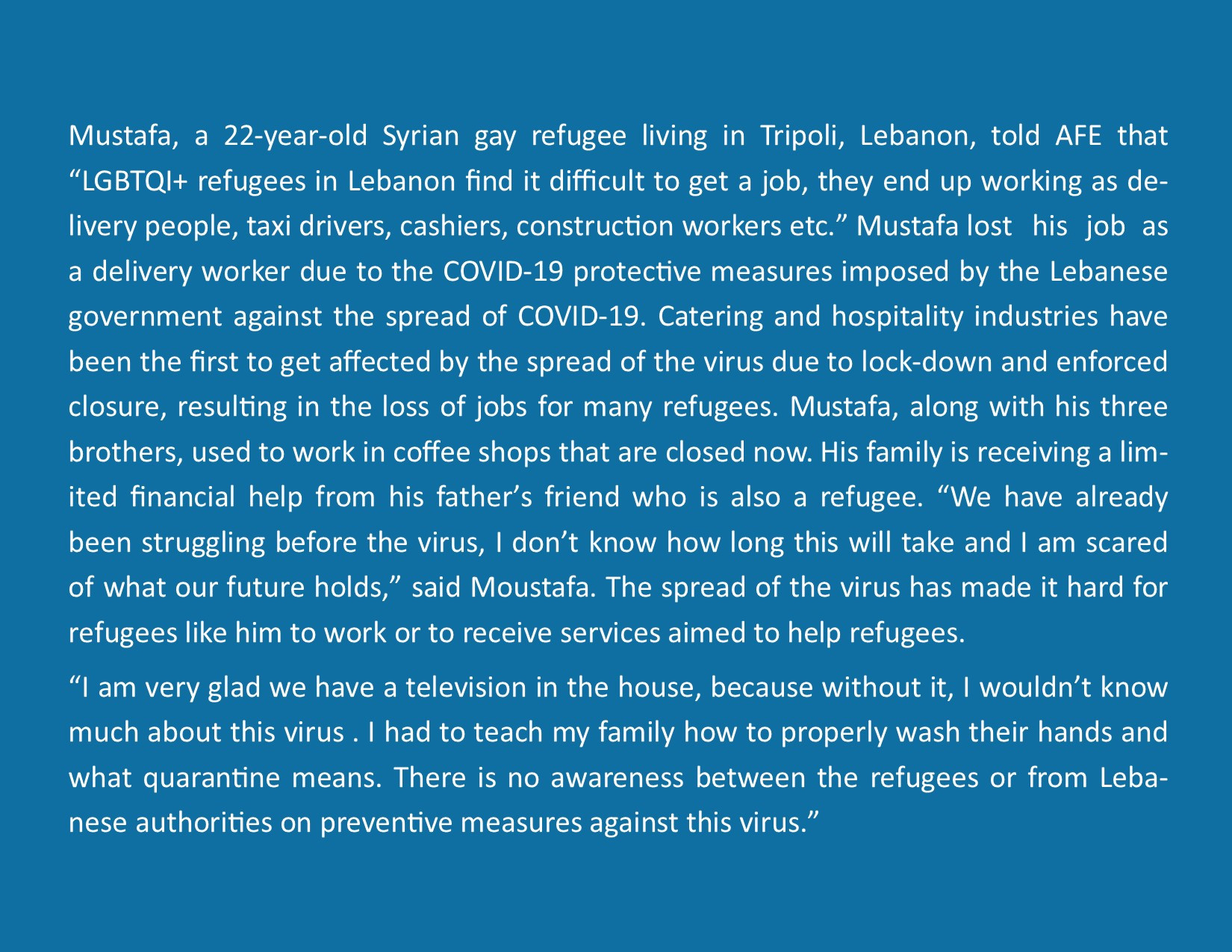 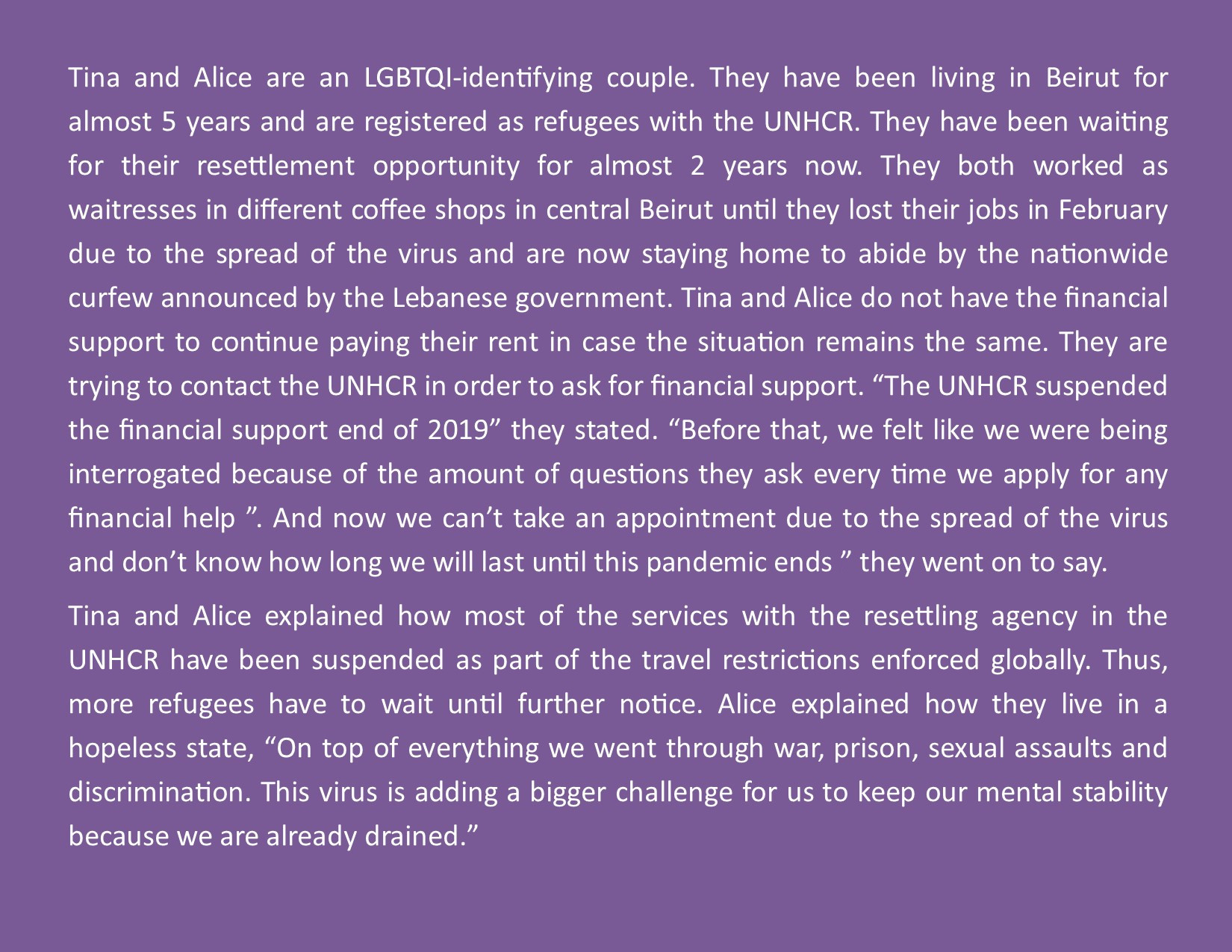 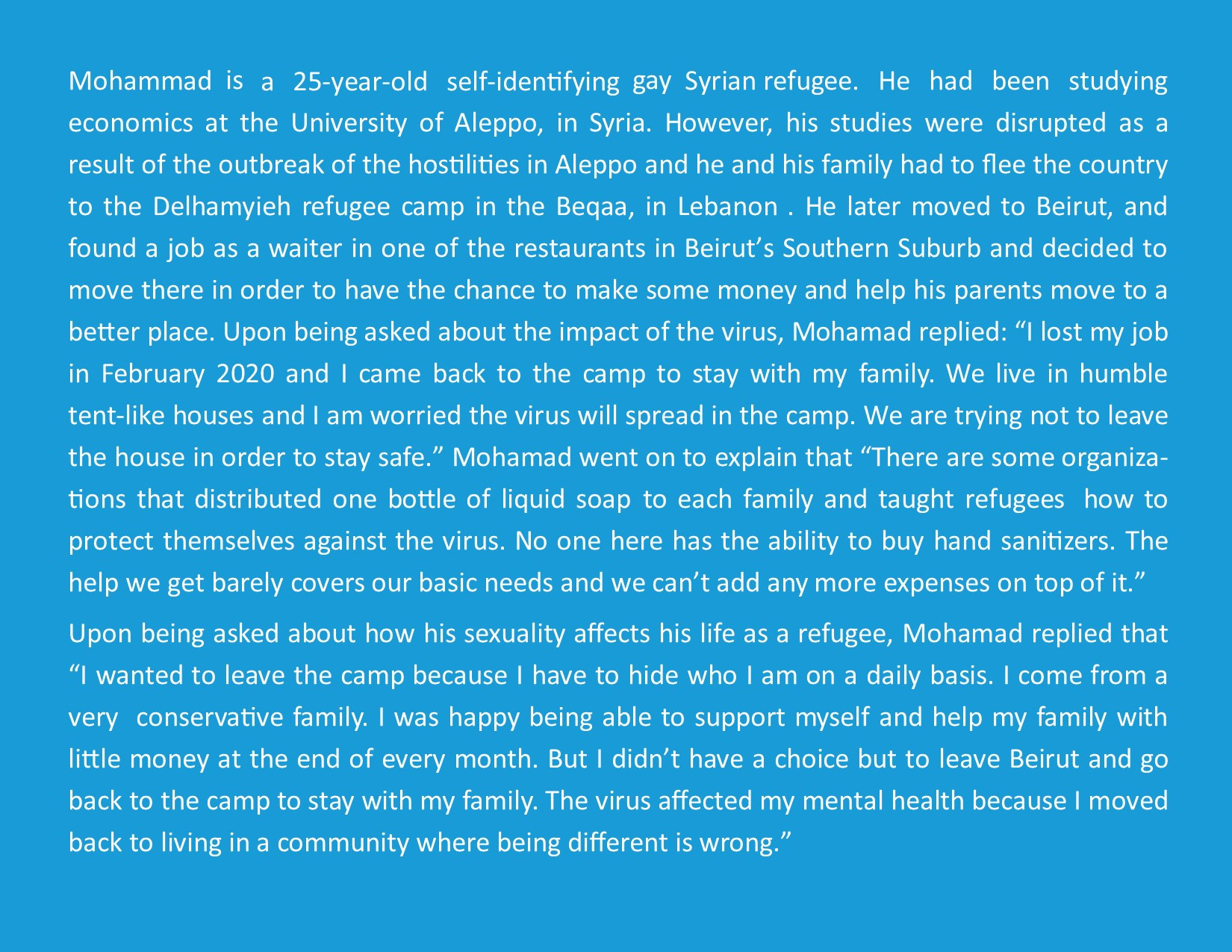 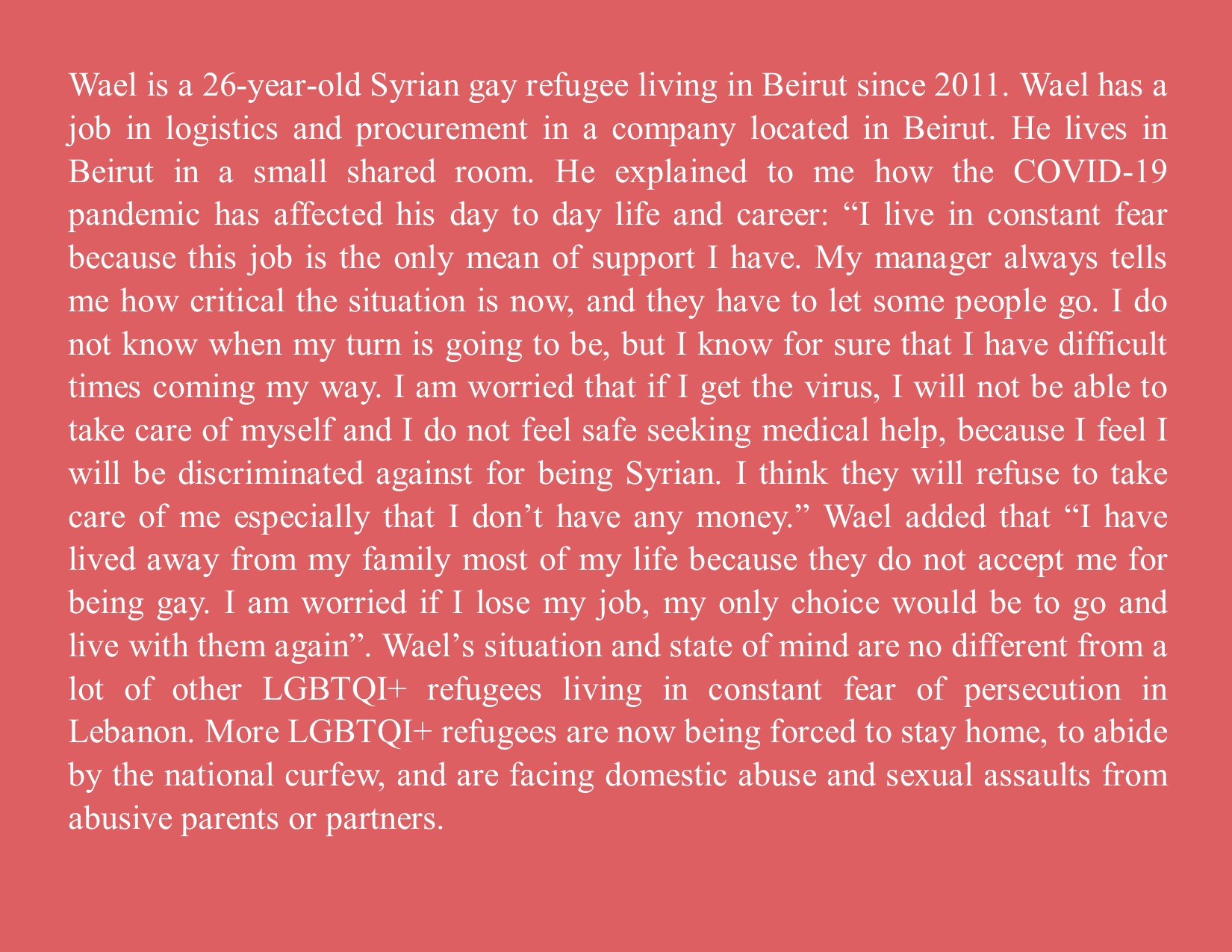 Throughout all of this, many good people are taking the spread of this virus seriously and accounting for the devastating impacts on the refugees’ lives. Nothing but small individual initiatives can support, both financially and mentally, the affected refugees for now. For instance, Soins infirmiers et Developpement Communautaire (SIDC) provides sexual and medical support for the LGBTQI community, such as, testing, vaccination, medication, psychological support, and sexual health awareness.  Mr. Patrick Farah, a VCT officer working with SIDC explained that they have a hotline anyone can call, which provides mental support for anyone in need during these hard times. Patrick says “At least [LGBTQ refugees] know they have someone to talk to”. Patrick said that refugees living with HIV are also still able to take their meds through SIDC. Yet, all testing, vaccinations appointments and the sexual health clinic are closed until further notice. Fortunately, some employees are standing in solidarity with the refugees and still accepting calls directed to the sexual health clinic in order to provide the help and support they need in cases of emergency. Patrick says that it is an extremely hard time for refugees who have been already in distress situation before the COVID-19 pandemic and that is due to their sexual orientation and legal status. Some refugees live in a poor environment and are in constant need of support and medical awareness. Some deal with already existing difficulties like drug use and mental health issues. 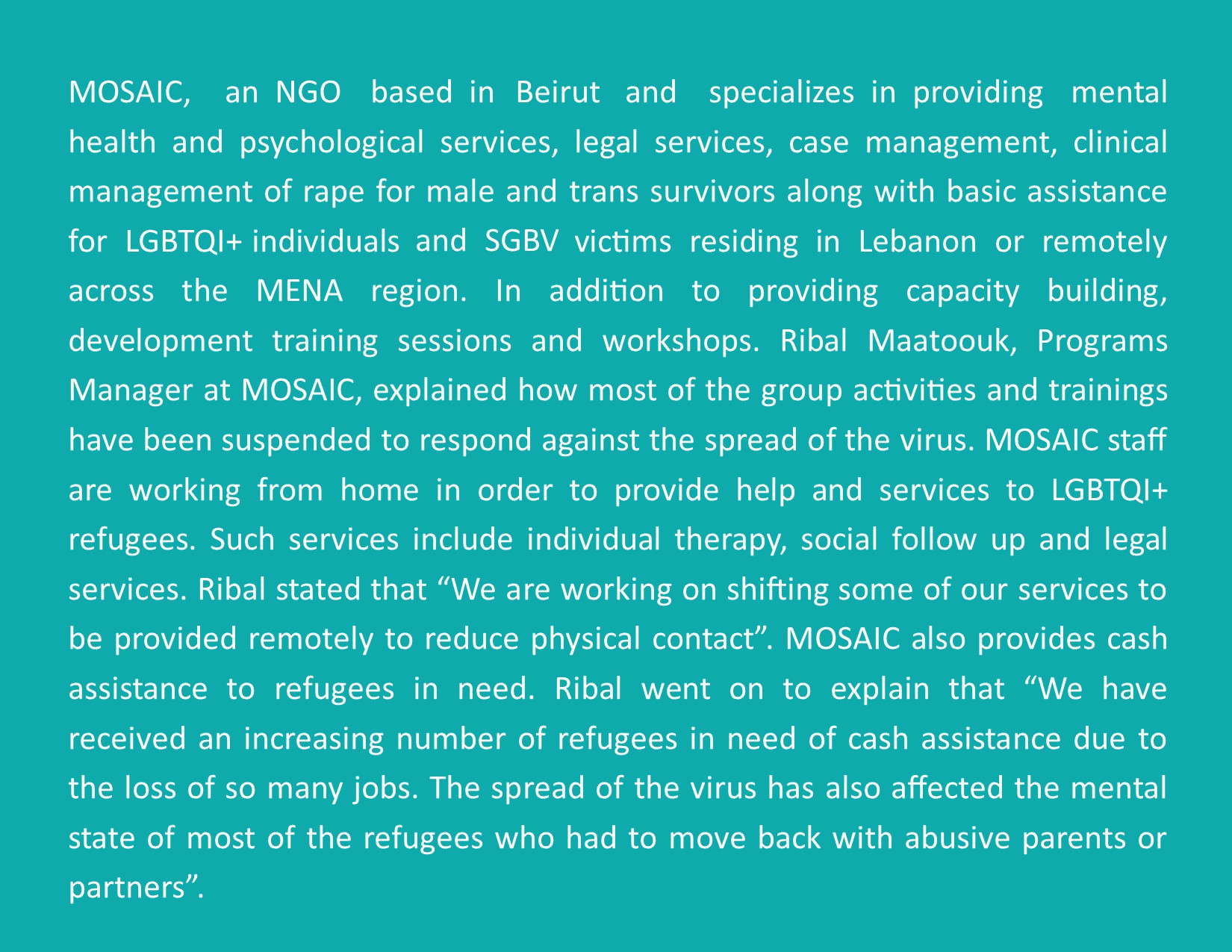 Arab Foundation for Equality and Freedom (AFE) is an active NGO within the field of supporting and encouraging sexuality, gender and bodily rights and sexual health movements in the MENA region through capacity building, knowledge production, protection, and advocacy. AFE has launched a page on its website containing information on the COVID-19 virus, and how LGBTQI+ individuals can take precaution to stay safe and cope with the stress and anxiety, caused by the current situation. AFE has also gathered donations, through individual initiative, to distribute food boxes and sanitizing equipment for LGBTQI+ refugees in need, and in different areas of Lebanon. AFE is also developing a mental health support online page, allowing LGBTQI+ refugees in, distressed mental situations, to call and book an appointment with a specialist.

LGBTQI+ Refugees are particularly vulnerable to the impact of COVID-19. Moreover, living conditions for homeless refugees can undermine the ability to follow public health advice, including quarantining and self-hygiene. LGBTQI+ refugees are, yet again, struggling with another challenge. Workers who engage with these vulnerable populations should currently be asking themselves: “Are the measures being put in place by the government taking into account the structural needs of different communities?” and, if not, how can we aim to fill the gaps left behind by official guidelines and practices? 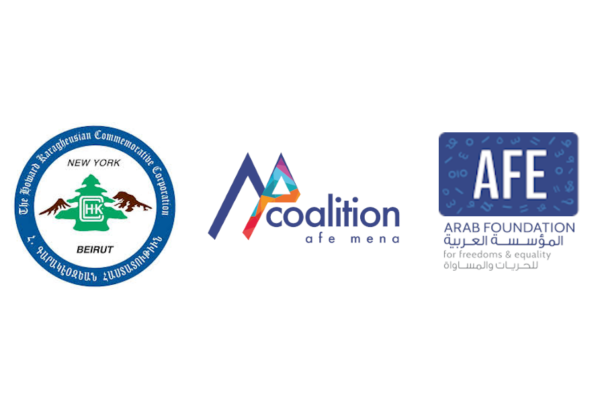 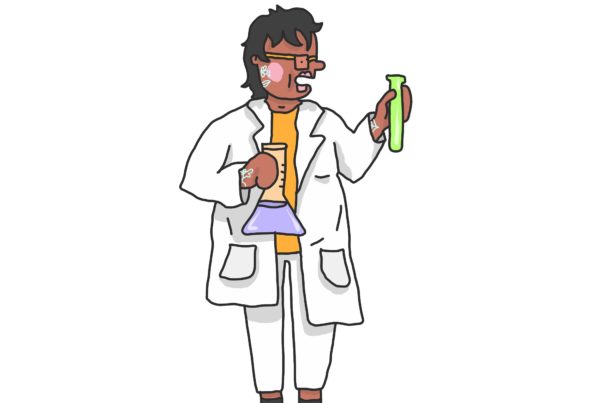 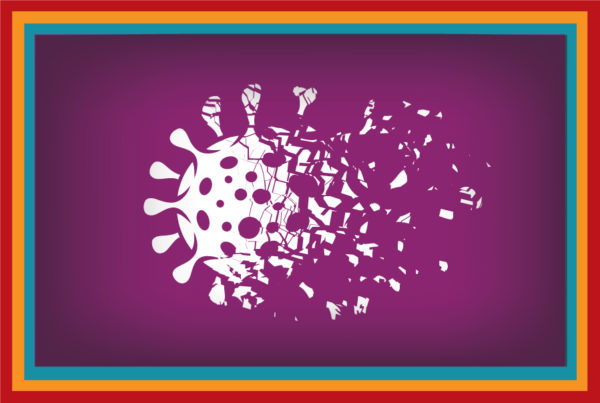 COVID-19 What We Know & What to Expect